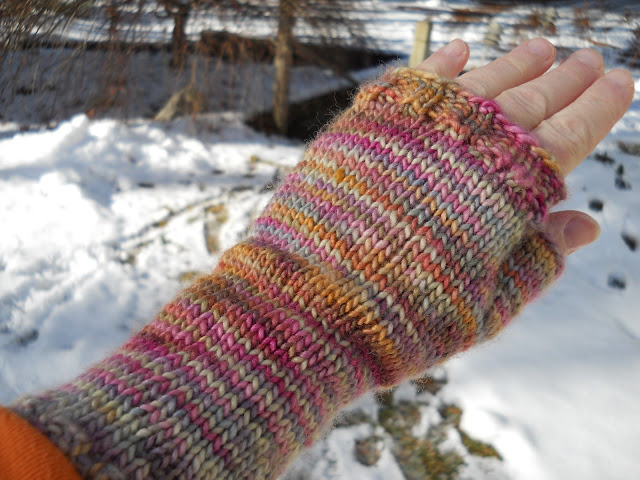 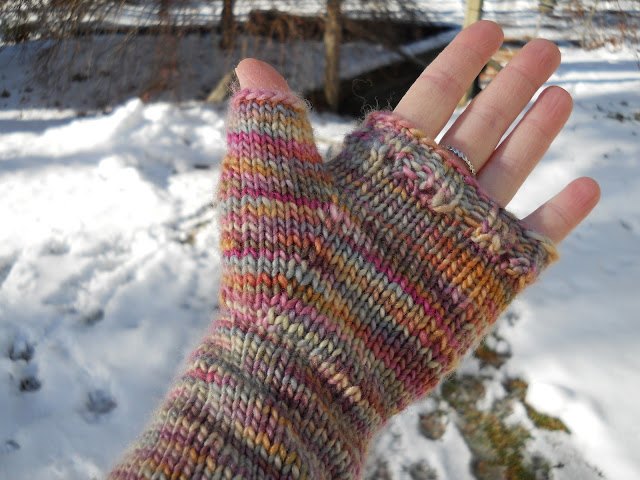 Well I have completed my first gusset ever! Woo hoo! I had been avoiding glove patterns that had thumbs because I was intimidated by them, but i found a free pattern for manos silk blend yarn, so I gave it a try. It's beautiful yarn. The gusset felt a bit awkward with the M1L and M1R, but I referred to some helpful youtube videos to help me along (it's always easier once you see someone else doing it. written instructions are often confusing), and it all worked out.

Merry Christmas everyone!
Posted by jen at 1:21 PM No comments: 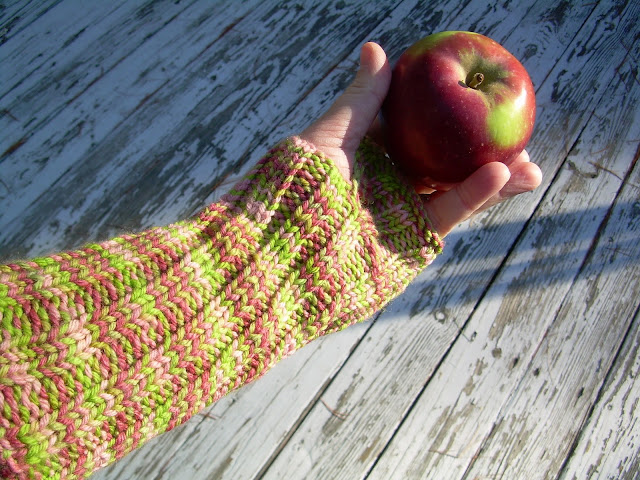 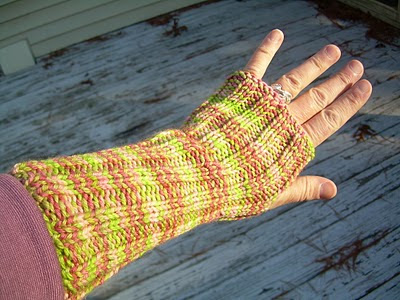 Here they are. One more Christmas gift complete! I think I've mentioned it before, but it is the "voodoo wrist warmer" from Knitty.com, and a very pleasant project.

I have had trouble in the past with having tight binding off. (I also tend to do a tight cast on, but doing the cable cast on seems to help with that.) I found the following method as a good alternative which leaves a very nice raised edge and is very elastic. It is also described as being a good bind off if you are going to be stitching at seams.

If you're in the Providence, RI area, I suggest you check out the 9th annual craft show at Craftland. One of my friends and I visited two nights ago and found many lovely handmade items to be had! We got there when things were fairly quiet, then it got swamped! It was nice seeing such a huge turnout. They had everything there from prints to textiles to ceramics and more. So many goodies! 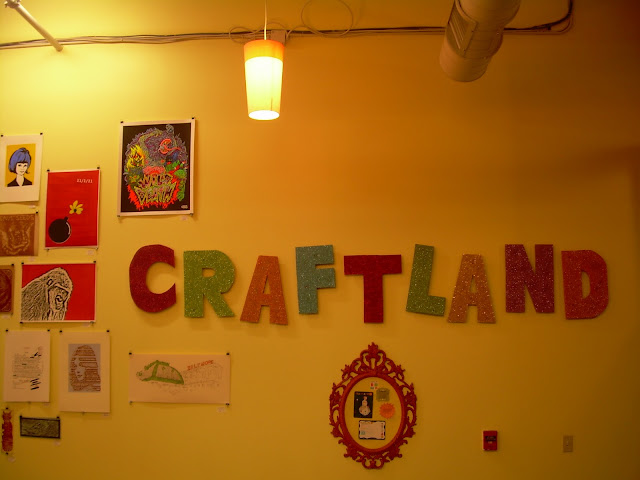 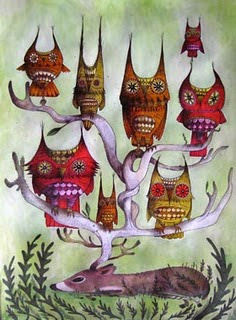 Check out the adorable owl art at Shivani's blog My Owl Barn !! You get to design your PDF calendar the way you like it. IT'S FREE! Pass it on.

Whew! Never before have i cussed so much while knitting. This yarn, though undeniably beautiful, is light as air and very hard for me to manage. I don't think I'll be rushing to make another lace item, that's for sure.

But I have to say, I learned A LOT from knitting this scarf. Now I can do YO's and K2tog's and PSSO's in my sleep. Repetition is key in learning, and I think these stitches are in my memory banks forever now. And at first I could not understand the pattern - that is, I couldn't read it and understand what would result. At some point, after all the repetition, I understood what was happening. It was really neat.


It sure is beautiful, if I do say so meself. The color of this yarn is stunning, and it is so squishy and poofy and fun to touch. Even better, that's one less thing I have to buy for Christmas! My  mom is gonna love it.

One of my first projects for Christmas - a scarf for my mom. I saw this photo/pattern and just knew I had to try it. It's so beautiful!! It's from Judith Durant's Luxury Yarn One-Skein Wonders. Not only am I determined to make homemade gifts for the holiday, but also to be frugal while doing so. This pattern uses a yarn that is priced around $12 per skein, which would be costly if I were to use a scarf pattern that required 3 or 4. So, here will be a scarf made from beautiful fibers (mohair and silk) and is still affordable.

Hopefully mine will look like this one from the photo in the book, but in cornflower blue (Douceur et Soie is the yarn name). My mother is blond with blue eyes and this blue is close to her eye color. I think it will be very pretty on her. 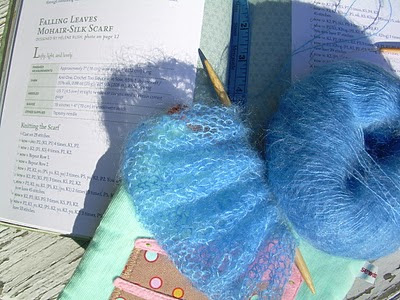 I've never worked lacey stuff before, and I'm finding it very frustrating working this yarn which is as light as air. I'm not a very graceful person, so working such fine yarn makes me feel like I've got big meaty hands and that I'm knitting with logs instead of needles. I switched from my lovely but long Brittany needles to my short DP's for easier maneuverability. The scarf is narrow enough to stay on the DP's fine.

Another project I'm working on is felting a couple of wool sweaters I bought on the cheap from Salvation Army and sewing at least one pair of gauntlets out of them. I think I will take the scrap leftover and toss together a blankie of some type for biddles because he just loves napping on my pile of felted sweaters!
Posted by jen at 2:28 PM No comments:

There was something missing on the latest gauntlets, so I did some picot edging today around the cuffs. 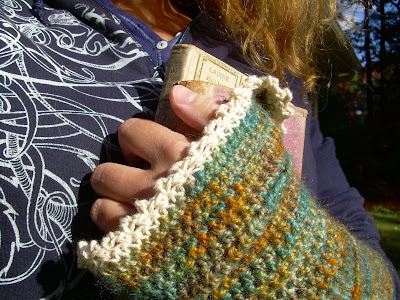 A little bit of edging goes a long way - so pretty! It also helps prevent that curling at the corners that you get with crochet. 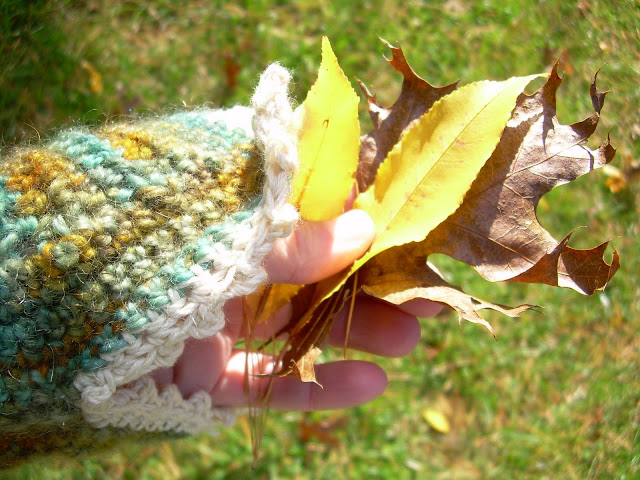 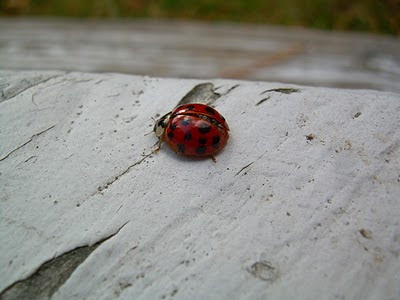 Hello little ladybug!
Posted by jen at 4:29 PM No comments: 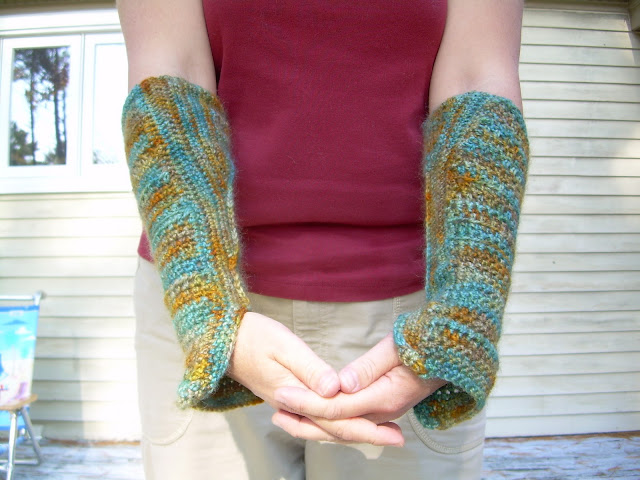 I just winged it with some lovely wool yarn on these gauntlets. I had made a scarf, then frogged it, then wondered if I could whip up gauntlets without a pattern. It took some doing, but for the most part were easy. I combined single and double crochet and sometimes crocheted into the back or the front of the stitches for some additional texture. I left the hand part loose and therefore the tips curl a bit. (They look uneven in the photos but these are symmetrical for the most part.) These can be folded back upon the wrists, or the "v" can be placed anywhere around the wrist. I'm very pleased! They're super warm and one of a kind.

I like being brainless while crafting. There are some wonderful patterns that I want to try, but there is something so therapeutic about just knitting/crocheting without counting or marking. I think this is why I enjoy making scarves so much since they are basically a big rectangle. 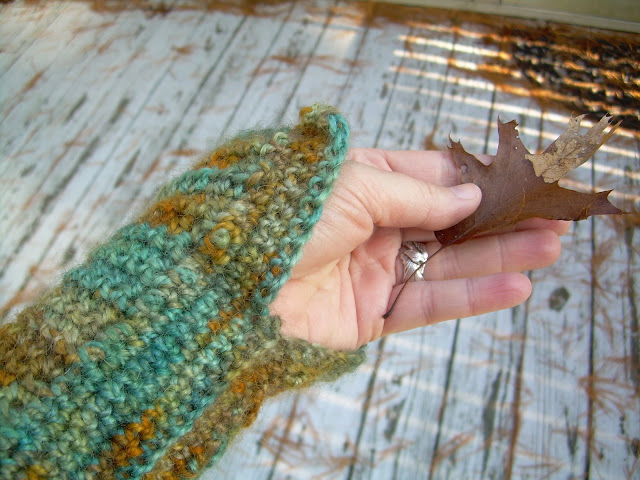 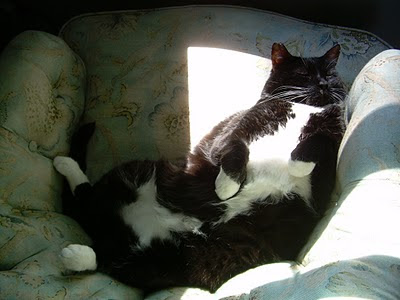 Email ThisBlogThis!Share to TwitterShare to FacebookShare to Pinterest
Labels: gauntlets

Trying out the new updates 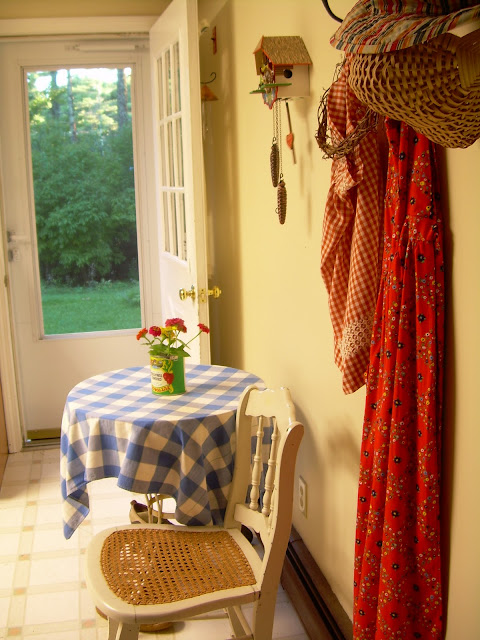 I'm liking these new updates on the ol' blogspot. They've certainly made some nice improvements. I always was frustrated that the photos were relatively small (and i could not figure out how to alter via html!) 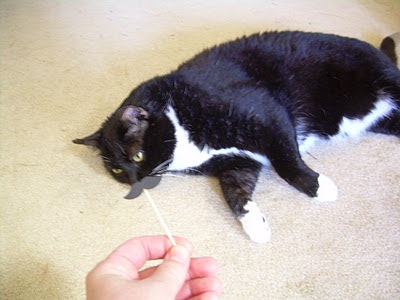 A while back I ordered a "miniature tiny mustache pick" from the loveliness who is called "The Small Object". (Here is a listing on her Etsy shoppe.)

What you do is hold it up to faces when you take their photo, and due to a trick of the eyes, it "looks" like they're wearing a mustache.

Well, upon receiving, I of course had to try it out on Mr. Biddles. Apologies once again for the fuzzy photos, but my camera sucks and the one that I really want costs a bazillion dollars. 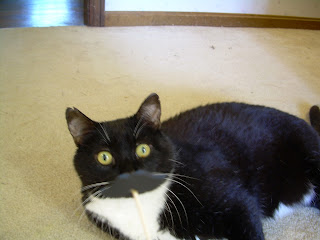 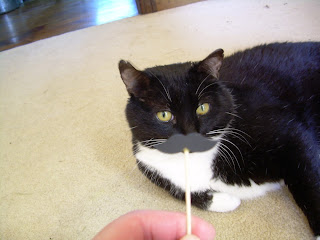 I'm really making an effort this year to craft presents for the holidays. Some people you just have to buy conventional things for, but if I can make something for someone, then that's what I'll do.

So I've got some projects lined up. There are so many awesome ideas out there on blogs and in craft books that it boggles the mind, but I think I've narrowed down a few prospects and I will try to post photos soon. 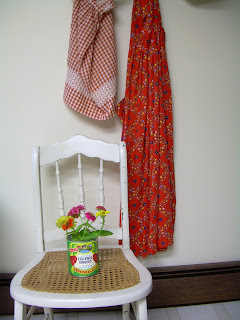 Email ThisBlogThis!Share to TwitterShare to FacebookShare to Pinterest
Labels: mustache 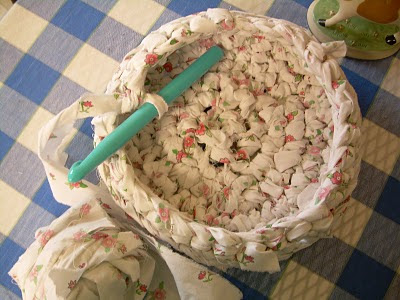 Inspired by a rag-rug pattern, I tore up a flat full-sized sheet into one long strip that was 1- 1/2" wide. It was a bit of work tearing that up! I was going to crochet it into a seat cushion for my rocking chair, but thought better of it - I think it might be rather uncomfortable to sit on this surface. So it has wound up being turned into some sort of container/basket. We'll see how large it winds up. I love this crochet hook - it is massive! I don't even know what size it is, lol. 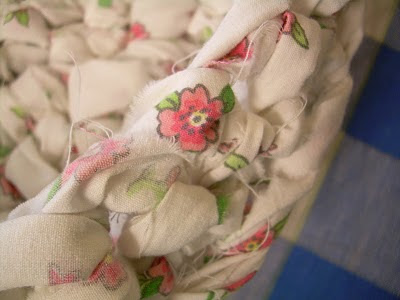 Email ThisBlogThis!Share to TwitterShare to FacebookShare to Pinterest
Labels: basket

At last. Boy, this stitch took me quite a while to master.

( I posted the pattern here.)

The scarf is approximately 4 1/2" wide and nearly 67" long. I would have made it a bit wider - I like wide scarves - but by the time the width became evident, i did not want to have to frog it again. Besides, that would have made it shorter and i would not have liked that.

It's a very pretty stitch. I'd like to use it again now that i've got the hang of it. I must say though after this project, i'll be happy to crochet for a while! 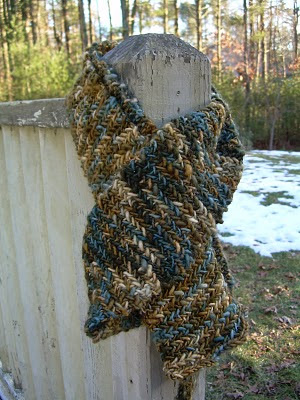 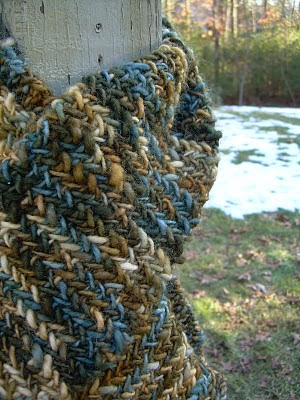 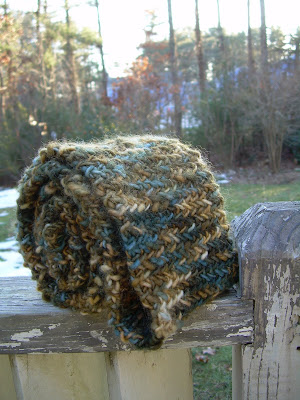 I bought a Schacht Cricket Loom! 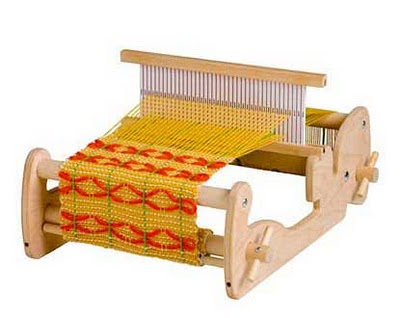 It won't arrive in the mail for another week or so, but i am looking forward to receiving it and learning how to weave. I did a lot of research on which loom to buy, and my head was swimming with information. There are so many options out there! Ultimately I decided on this loom, which is small and modestly-priced. The people on Ravelry were fantastic in helping me decide! 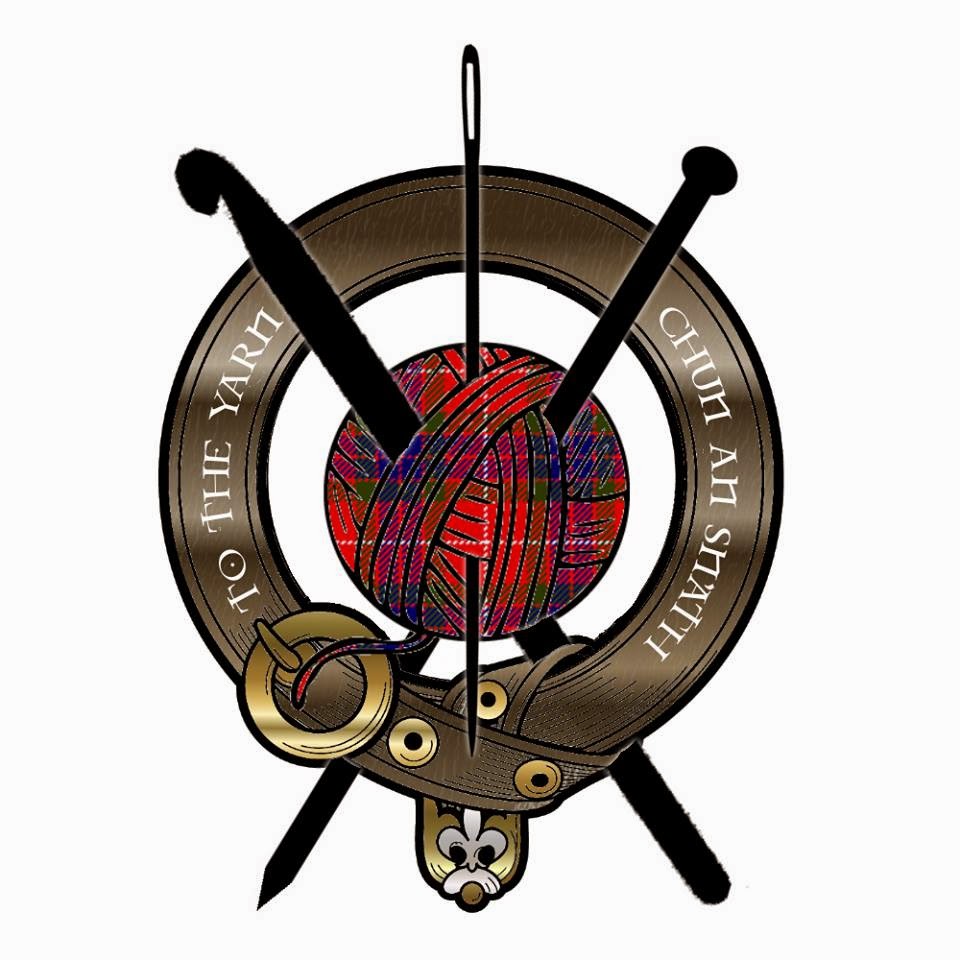